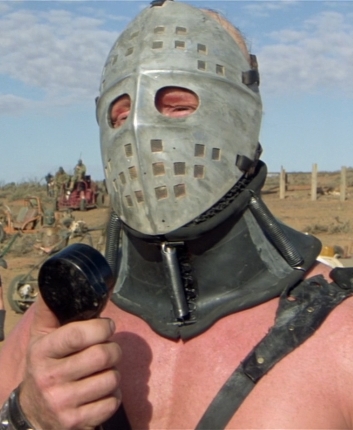 Throw a rock in any direction, and you’ll hit someone’s zombie apocalypse survival plan. It’s astounding how ubiquitous it’s become. Everyone these days seems to have an elaborate strategy worked out to stay alive and thrive in the event that civilization falls in the wake of plagues, zombies, robot uprisings, alien invasions, natural disasters, nuclear war or even dragons.

There are even now magazines dedicated to this topic, and I’m not entirely sure how serious they’re intended to be.

But the truth is, it doesn’t matter how high your level is in Fallout: New Vegas, or how many issues of the Walking Dead you’ve read, or how many times you’ve seen the Road Warrior. Most people in the post-apocalypse are kinda…y’know…dead.

That prompts this month’s Mailbag question:

“Be Honest. How would you really fare in a post-apocalyptic setting?”

Are you kidding me?

My best odds of surviving any civilization destroying calamity is if (1) I know it’s coming in advance — which I wouldn’t; and if (2) I’m a billionaire who can build a habitable and comfortable underground bunker the size of a large office building and stocked with decades worth of food, entertainment, power, books, weapons and friends.

That, too, if you’ve seen my bank statement, isn’t going to happen, either.

And on the outside, forget it.

I’ve never fired a gun or been in a real fight. I’ve changed a tire maybe once in my life. I’m not a scientist, doctor, helicopter pilot, hunter, soldier, farmer, auto mechanic or pilot. I may have been a Cub Scout for like a year when I was ten years old, but I have neither the training or the temperament for survival.

Basically put, unless a ground of survivors has a critical need for a person with a working knowledge of Batman and Star Trek, I’m not likely to be a first draft pick.

There’s a reason that 99% of humans on the Walking Dead are zombies. That reason is people like me.

I’m a pretty useless person in a world destroying crisis.

While I’ve always had a real affinity for the post-apocalyptic setting — which is all about doing an autopsy of our own species. When we follow the adventures of a Rick Grimes, a George Taylor, or a “Mad” Max Rockatansky, we’re taking a hard look at the bullshit that trips us up as a species and makes us kill each other, rather than explore the stars and cure cancer.

It’s a jarring look that both fascinates and horrifies me. But what it doesn’t do is make me want to live there.

Because I wouldn’t live there for very long. A week, tops.

And let’s be brutally honest, neither would you.

I gotta agree with Mike here, I probably wouldn’t last very long either. I don’t know how to farm (never met a houseplant I couldn’t kill), to raise animals (cats don’t count), to hunt wild game (Big Buck Hunter doesn’t either), nor am I very good with carpentry or simple machines. To put it succintly: very few survival skills. I’m good at making friends, but I surmise in an apocalyptic free-for-all, the truly resourceful people will already have too many “friends.”

But, if we are to take this hypothetical just slightly beyond believability, I’d say that because of the region in which I live, Western Washington, I’d have a fairer shake than a great deal of America (or the world for that matter). Here’s why:

Abundant fishing: As soon as the global economy collapses, we’re no longer trawling for world export. So long as you’ve got a rod and reel, the patience to learn and better yet a boat (there are a LOT of boats around here), a practically endless supply of seafood is at my doorstep. There’d be a bustling fishing business for anyone with the wherewithall to get their feet wet.

Apples and Potatoes: We grow the most of these two crops than all of North America. Potatoes are INCREDIBLY efficient at producing edible calories (about a million calories per acre per year), and we have the capacity to grow a huge amount of them. Same with apples: vitamin C, roughage. No scurvy or impacted colons here.

Hydropower: So long as equipment can be maintained, we have a nearly endless supply of clean electricity, thanks to our hydroelectric dams. With electricity comes light, heat, and power to do work. This could put Western Washington substantially ahead of places in the mid-west that rely almost exclusively on coal plants (whose supply of fuel would disappear as soon as the chaos hits). Of course, this element means that we’d be in near-constant danger of encroachment, from outside interlopers. Which brings me to number four…

Guns: The majority of the state of Washington aren’t Prius-driving, quinoa-eating, Democrat-voting pacificists; they’re ready to defend their own. With some organizing, bartering, and maybe the creation of a mystical cult, we could create a functional insulated society. Add a few decades of building strategic fortifications, we might just be able to ride it out until the Second Age of Atlantis.

Water: We’re surrounded by it. It means transportation, defense, drinking water and crop fuel. With the lower half of the west coast perilously close to spontaneous combustion, it would be helpful to live in a place where things actually grow. There’s a reason why Hollywood, perched at the edge of an unforgiving desert, has a perpetual fascination with dry, desert apocalypses: they’re one mutant virus away from living it. Fuck that shit. I’ll take grey and cloudy over dying of thirst any day.

Last but not least, intoxicants: We’re growin’ the shit out of some marijuana here. Maybe that’d give us some bargaining power with our neighbors, and create a cottage industry that could keep us afloat. Also, we’re known for growing some mean grapes and a metric shit-ton of hops. Wine, beer, weed: we’d be the one-stop-shop for a little recreational pick-me-up that would help take your troubles off of the depressing-as-shit apocalypse.

Doomsday won’t be Mad Max or Terminator 2, but if it did come, you’d be better off living in abundance than fighting over scraps in some inhospitable shit-hole. Just don’t come moving in my neighborhood!

How about you? Let us know in the comments below!

6 thoughts on “Radio vs. the Mailbag: You’re No Daryl Dixon!”