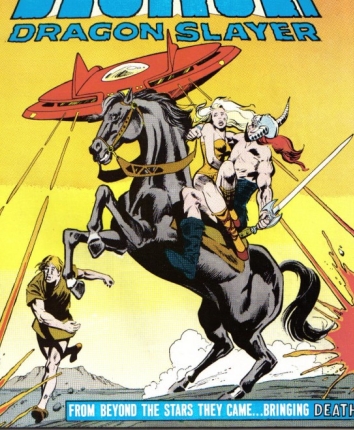 The Mailbag is back! And this time, we’re jumping into one of the most divisive issues of fandom: genre.

Many geeks contend that the differences between the genres of science fiction and fantasy cannot be any more dissimilar in terms of artistic intent, overarching themes and subject matter.

Others argue that science fiction and fantasy tell similar stories, but just use different settings, props and popular tropes.

So, what do you think, listeners? This month. we ask:

“Are the genres of science fiction and fantasy truly opposites in meaningful thematic ways, or are their differences merely cosmetic?”

Standing in a particular spot in a Barnes & Noble, or really any bookstore in America, you might bear witness to one of the great conflicts of nerd literature: Sci-Fi versus Fantasy. But, dear reader, isn’t the real question: are they telling the same stories but with different window dressing?

I must admit to my own personal deficit of exposure to fantasy books. I’ve read Tolkien, a few D&D novels, the first two books in Richard K. Morgan’s ‘The Steel Remains’ series, and a smattering of other stories. I’m no encyclopedia on the breadth of fantasy stories. Excepting for my ignorance, personally, I’d like the two sections to be entirely separated. On opposite ends of the bookstore, please. When I’m searching for a book that includes intergalactic spaceships, intelligent computers, extraterrestrial civilizations, and high-concept allegories, I don’t want to run into yet another dopey yarn about orcs and elves and swords with names.

But what about those stories that bridge the two, those where the line may be so blurry it is impossible to call? I must concede that in the genre fiction world that comes after Star Wars, those walls of separation have thinned. I mean, it had a princess, a wizard and a rogue (and, I suppose, a whiny field-hand peon) trying to blow up the baddie’s keep using swords and crossbows. The space and asteroids and aliens were all, as we would say in philosophy, accidental qualities not essential ones. It’s a fantasy tale wrapped up in the costumery and makeup of a sci-fi flick.

Where does this leave me on the original question? Despite my own personal distaste for blurring of those two genres, I must admit, that in the end, the themes, elements and settings can be so interchangeable that it may not matter. Elves in Space? Bring it on. Transdimensional samurai fighting grey aliens with tommy guns? I’ll take it. Just give me a setting that makes me long to be there, characters I care about and a sequence of events not too predictable. We can live in peace, brothers.

I have to admit, I’ve always been a bit puzzled when people say that fantasy and science fiction are polar opposites.

It’s been popular among fandom to argue that science fiction is intrinsically allegorical.

There’s no question that science fiction is a wonderful tool for this sort of thing.

Series like Planet of the Apes, Star Trek, and the writings of Ray Bradbury, George Orwell, and Kurt Vonnegut certainly were all excellent stories that provoke discussion about topics like racism, sexism, war, censorship, and the corrupting nature of unchecked power.

It’s also common to contend that fantasy drops allegory in favor of stories of daring-do from long ago. Admittedly, there is a lot less social parable to be found in modern fantasy, but this isn’t because fantasy is somehow inherently incompatible with it.

Traditions – even remarkably common ones – are not hard rules.

Not all science fiction is metaphor, after all. Sometimes it’s also primarily intended as fun adventure stories without ambitions of social relevance.

Are the adventures of Flash Gordon, John Carter of Mars and Doctor Who not also science fiction tales? Certainly the focus of these stories is the rollicking adventure, the daring escapes and the victory of good over evil, rather than on any heady philosophical point.

And that’s just fine with me. Not every work of fiction is going to be Citizen Kane. Nor should they all try to be.

At the same time, we shouldn’t assume that fantasy fiction is exclusively empty calories.

While J.R.R. Tolkien long denied that the Lord of the Rings trilogy was a parable for World War II, I have a hard time believing him when I read “the Scouring of the Shire” and the chapters that follow it.

Frodo destroys the One Ring and defeats Sauron, but the experience of war is one that he cannot, in the end, shake. He’s a changed person at the end of the story, and so is the idyllic Shire, which didn’t escape the horrors of war. He does what he can to heal it, but finds that the he no longer belongs there anymore. The wounds he suffered in the course of the story, both physical and psychological, prompt him to leave Middle Earth entirely and essentially sail to Heaven with the elves.

That isn’t your typical “happily ever after” fantasy ending, and it says a lot about the author’s views about the impact that even a just war on those that fight in them.

Therefore, I don’t believe the distinction between the two genres is one of “social allegory” versus an “escapist heroic myth.”

I’d argue that the real distinction between fantasy and science fiction has a lot more to do with set dressing than it does any hard line differences written into their specific genre DNA.

What exactly is the difference between Harry Potter’s wand and the Doctor’s sonic screwdriver? They serve largely the same purpose in their stories. They’re iconic tools that let the protagonist do whatever the writer needs them to do….within reason. Because you don’t want to make things too easy for our hero, after all.

The distinction that a lot of fans tend to overvalue is the in-story explanation for how these things are supposed to work.

The sonic screwdriver has been used in almost comically diverse ways in fifty years of Doctor Who. It’s opened locks, hacked into computers, repaired chains, scanned for life signs, ignited swamp gas and even modified a cell phone so that it could make calls across time and space.

It relies on Clarke’s Third Law to pretend that it’s based on some kind of advanced science principle, but like Clarke says, it’s indistinguishable from a magic wand in another story.

J.K. Rowling, on the other hand, doesn’t even try to pretend that there’s anything scientific about Harry’s wand. It’s just magic. Some of the particulars are a little bit different, but Harry uses it in many of the same way the Doctor uses his “magic wand.”

I’d also argue that any story can be turned into any other genre if you tweak the setting and the in-story explanations.

Isn’t Ser Jorah Mormont’s tragic back story in A Game of Thrones remarkably similar to that of William H. Macy’s Jerry Lundegaard in the crime film Fargo? Couldn’t the Road Warrior just as easily be a Western? Isn’t the Death Star just a really big Ark of the Covenant?

While we all have our personal preferences for our stories’ settings and conventions, I believe that genre is far less important to a story’s actual substance than most people argue.

What do you think? Let us know in the comments below!

5 thoughts on “Radio vs. the Mailbag: Of Sorcerers and Spaceships”