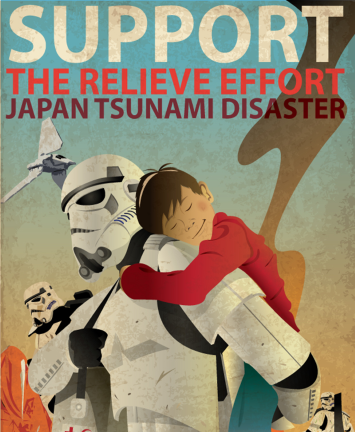 In the modern world of the internet, it can be incredibly easy to see the ugly, embarrassing, and toxic side of fandom.

But this also makes the good stuff all the more welcoming. For this post, rather than only dwell on the bad, let’s take a moment to recognize the people and moments that remind you that people have often used their shared love of popular culture as a vehicle to be awesome.

Which prompts this month’s Mailbag question:

“What have you seen or experienced that’s left you feeling really proud of and happy about pop culture fandom?”

Being a gamer ain’t what it used to be. Now everyone, including your grandparents, are in on it (thanks, Wii Sports!) But, the kid in me pines away for that time when video games weren’t ubiquitous. I’m thinking of when you played one game at a time.

It was that precious time you spent playing for days on end, dreaming about it, and waking up with it as your first thought… something about its rarity was inescapably endearing. You may have been one of ten million kids who owned the very same game, but it was easy to feel as if you were The Last Starfighter.

I don’t get that much anymore. With over 200 games in my Steam library, droves of old ROMs and pretty much any game (old or new) at my fingertips, it’s hard to feel that sense of intimacy. But not impossible.

I was able to recapture this feeling from something fan-made, a pain-staking exercise of devotion, from the ROM-hack community. Most gamers probably aren’t aware of a small, but dedicated, swath of fanatics who set out to find new surprises in old games. Some even take games that never made to the U.S., never were translated into English, and spend months (and years) ripping apart the code of a game, translating its text, and rebuilding it solely for the enjoyment.

And people are still grinding these out… by the thousands.

But my entre was the translation patch of Front Mission for the Super Famicom (the SNES in Japan). Front Mission is an isometric, turn-based RPG about a group of mercenary mech pilots caught in a civil war on a small island. Published by Square, the company behind the Final Fantasy series, its story had surprising emotional depth, while the intricacies of its combat and character mechanics are deeply impressive.

I had never heard about this game before I stumbled on the translation, but after loading it up, I played for nearly two days straight. It was an exhilarating, and exhausting time. I must have logged hundreds of hours (and even more when Nintendo decided to release their own localization for the Nintendo DS), and none of it was wasted.

A small group of coders, translators and playtesters took three years of work, with never any hope of financial reward, to release this out to the world. Out of love for a piece of art that was but a whisper in gaming history, and almost totally unheard of in America. It seems silly to admit, but they brought me back to that place that I thought had been all but extinct.

While it may be getting a wee bit too crowded recently for grumpy ol’ me, I’m thrilled that the Emerald City Comic Con has gotten as big as it has.

I remember the days when Seattle Cons were simply expanded comic book swap meets where ten year-old me hoped to fill in the gaps of my collections of titles like Justice League International.

It’s gratifying so see that my part of the country can support not just one world class con, but has bred several, including Jet City Comic Show and Geek Girl Con.

Gone are the days of gloomy, poorly lit cons that smelled of hot dog water.

We’re entering a new Golden Age of fandom with cons that have Hollywood-scaled promotional clout.

It’s a surge of popularity and production value that finds some parity in the sudden explosion of Doctor Who fandom.

Even as a longtime geek, I knew almost nothing about Doctor Who before the series was relaunched in 2005 and my friends started pestering me to watch it.

I had always known it as the weird British PBS show about the guy in a giant scarf running from rubber monsters in a rock quarry.

It was certainly not the TV show I would have imagined I’d ever be a fan of. Nor would I imagine that its explosion of popularity during the mid-to-late 2000s would make it one of the most vibrant, diverse and enthusiastic fandoms in the United States.

And once I started watching, I was hooked. I started devouring the new episodes, and the back catalog of classic episodes, and absorbing as much as of the series mythology that the internet could feed me.

Which, unsurprisingly, is a lot.

These two things collided at the Emerald City Comic Con in 2013, when friend of the show Isaac Mertel of Many Hats fame asked me to be a judge at a largely improvised Doctor Who costume contest he was putting on.

Not really knowing what to expect – and seeing an opportunity to get some visibility for RvtM – I said, “why not?”

What really struck me immediately was how much Doctor Who — which had always been the most obscure, esoteric nerd franchise for most of my life — completely dominated the con’s cosplay.

Not only did I see more fezzes and bow ties around the con than I had ever seen in one place, but I saw people in costumes bridging the entire 50 year lineage of the series.

And without much in the way of preparation, Isaac had gotten at least fifty fans in Whovian attire to not only participate in his costume contest, but to do so with a sincere and infectious enthusiasm that I’ve rarely encountered in years of going to fan conventions.

And unlike the jaded cynicism and wry amusement that I’ve usually found among my chosen people, I was seeing something resembling unrestrained….joy?

Is that what it’s called?

Isaac put me in charge corralling the people dressed in costumes of the Doctor’s various companion characters and getting them signed up for the contest.

There was the immediate shared joy of loving the same thing, and seeing other people get as excited about Doctor Who in a way that they thought was unique to them.

My various Amys knew exactly what episode they’d taken their respective costumes from — one was the “Kiss-o-gram Amy” from “the Eleventh Hour” and the other was “hash marks Amy” from “Day of the Moon” — and the elation they clearly got from their mutual recognition was very easy to get swept up in.

Sometimes we forget that the reason that cons exist is that a large group of people love the same thing enough that we want to burn calories loving it.

Whether it’s debating our favorites — and least favorites — or making elaborate costumes or exchanging trivia 0r collecting memorabilia or autographs, we do this because we love this stuff.

And sometimes, it can be incredibly affirming to be reminded of that.

What moments or experiences have made you feel positively about fandom? Let us know in the comments below!

4 thoughts on “Radio vs. the Mailbag: Restoring Your Faith In Humanity (Just a Little Bit)”