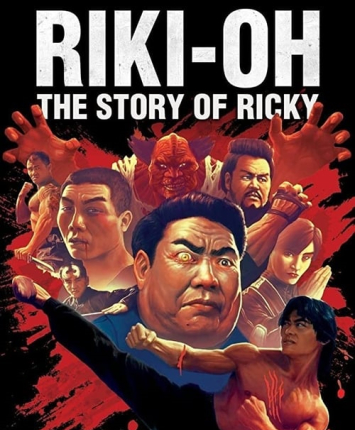 This December, we are proud to announce that Radio vs. the Martians! is going to be sponsoring a theatrical screening of the craziest, bloodiest martial arts film of all time, Riki-Oh: the Story of Ricky, to benefit the Pacific Northwest Starbucks Workers United relief fund.

Cost:   Tickets at $12.50 each, with all admissions for PNW Starbucks Workers United

You can buy tickets now, but seats are limited!

RADIO VS. THE MARTIANS! PRESENTS…. RIKI-OH: THE STORY OF RICKY!

You’d be hard pressed to find a movie as strange, bloody, absurd, or thrilling to watch as RIKI-OH: THE STORY OF RICKY, but this 1991 Hong Kong martial arts splatterfest is truly something special.

Directed by Shaw Brothers veteran cinematographer Lam Ngai Kai and headlined by a then-18 year old Fan Siu-wong as kung fu Hercules and flautist, Ricky Ho, this crowd-pleasing cult film really tests the limits of good taste and how many ways one can creatively destroy a human dummy on film.

In the far future year of 2001, all prisons have been privatized into for-profit businesses (can you even imagine?). The latest inmate is the eponymous Ricky, convicted of manslaughter for avenging his girlfriend’s murder with his inexplicable superhuman strength and mastery of Qigong.

What follows is structured much like a video game, as Ricky battles a super-powered menagerie of increasingly bizarre and gimmicky convicts deputized by the prison’s evil Warden and his hook-handed Assistant Warden (played with a cartoonish glee by Siu-wong’s own father, Fan Mei-sheng), whose glass eye bafflingly doubles as a mint dispenser. Just go with it.

As Ricky is elevated to an almost Christ-like champion of the facility’s abused and oppressed prisoners, he literally destroys his opponents with his bare hands, impressive fight choreography and some charmingly hilarious special effects.

This screening is sponsored by the RADIO VS. THE MARTIANS! podcast as a benefit for the PACIFIC NORTHWEST STARBUCKS WORKERS UNITED labor union, and 100% of the admissions will be donated to their Relief Fund.