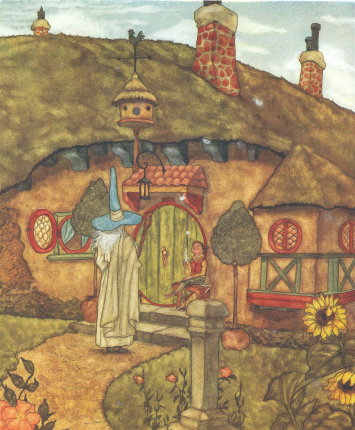 “In a hole in the ground there lived a hobbit.”

This month, we’re riddling in the dark and escaping the goblin caves with Kayleigh Casterline and revisiting J.R.R. Tolkien’s classic 1937 fantasy book that introduced readers to the world of Middle-earth, The Hobbit!

Bilbo Baggins is a hobbit who enjoys peace and quiet comfort, and never does anything unexpected to make the neighbors talk. So nobody is more surprised than him when he finds himself railroaded by the wizard Gandalf into accompanying a band of exiled dwarves on a quest reclaim their kingdom and treasure from a fire-breathing dragon! Now thrust into a wider world full of goblins, wood elves, secret doors, giant spiders and magic rings, the homebody Bilbo finds in himself a dormant courage and resourcefulness than he could have never imagined.